A sweet hug between a lowland gorilla and the man who saved his life was the people’s choice for the People’s Choice Wildlife Refuge of the Year winner.

Photographer Joe Ann MacArthur took the touching photo in Cameroon. Pekin, the rescued gorilla, was pushed back and forth between animal shelters by his caretaker Apollinaire Nduhoudou. 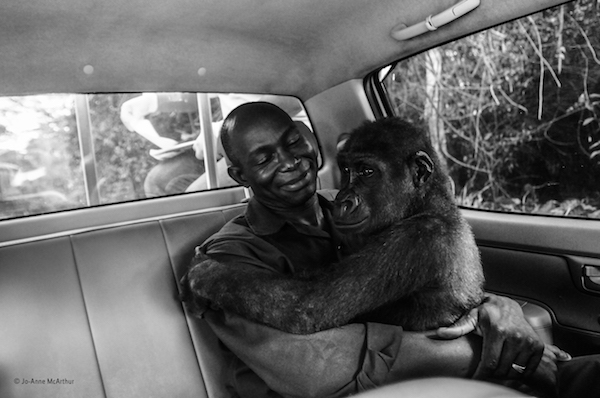 Pinkin is caught by poachers who sell her for bushmeat, but is rescued at the last minute by Ape Action Africa.

Unfortunately, bushmeat poaching is common in Cameroon and other areas of Africa and continues to threaten endangered gorillas.

Baby monkeys often die after their mothers are killed in the illegal wildlife trade or sold as pets.

In the photo of McArthur, Pikin was taken to a sanctuary in the woods and awakened from anesthesia. I woke up in Apollinaire’s arms. The two share a strong bond. Apollinaire is a refugee like Pekin after he was forced by the civil war to flee his home in Chad.

The winning MacArthur portrait was selected in the Museum of Natural History’s annual competition. Selected from a selection list of 24 photos from around 50,000 entries!

The Canadian photographer is grateful for this appreciation and hopes it will inspire more compassion for the animals.

MacArthur says, “I am very grateful that this image caught on with people, and I hope it inspires us all to care a little more about animals. No act of compassion for them is so small. I document regularly the atrocities animals suffer on our hands, but sometimes I see stories of salvation, hope, and redemption. ”

Among the finalists of the competition:

The sloths are hanging out – Luciano Candesani

Candesani photographed this eye-level shot of this three-toed sloth after climbing a cecropia tree in the Atlantic rainforest in southern Bahia, Brazil.

Sloths like to feed on the leaves of these trees and are therefore often seen in the canopy. 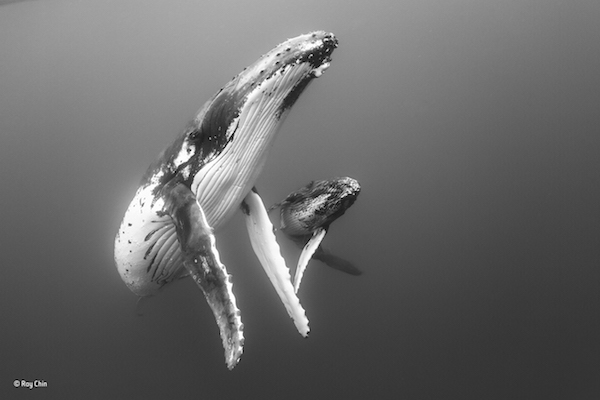 Every year from July to late October, southern humpback whales migrate north from their feeding grounds in Antarctica to give birth in the warm, sheltered waters off Tonga.

Ray encounters this hunchbacked mother and calf swimming peacefully in the plankton-laden waters around the Vava’u archipelago of Tonga.

After Raye gently approached them, he swam up the giants to look at him and fired that shot as they turned.

A purple breast cylinder rides a zebra from Lakshitha Karunaratna 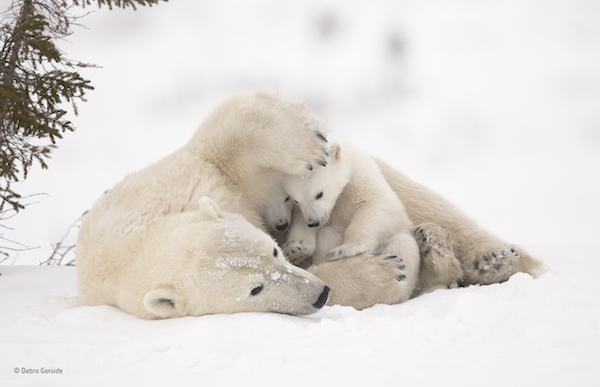 Karunarathna was on a safari in MaasaiMara National Reserve, Kenya when he spotted a rare sight – a purple-breasted bird hovering over a zebra.

Birds usually prefer to sit high in the foliage, but this roller coaster spent an hour or more riding a horse and enjoying the occasional insect meal. Karunarathna patiently waited for other zebras to form the striped backdrop before snapping the shot down.

Garside waited patiently for six days near a polar bear family’s den in Wapusk National Park in Manitoba, Canada for them to take this picture.

She whirled around in the freezing temperatures, capturing this beautiful moment for a mother while keeping her little ones warm. Garside said she took the photo in the most difficult circumstances she has ever faced.

All of the images highlight nature and the big issues facing our planet. The People’s Choice Wildlife Photo of the Year award is given for outstanding wildlife photography chosen by the public.

Commenting on the award-winning photo, Museum Director Sir Michael Dixon said: “Jo Ann’s inspirational image symbolizes the power of humanity to protect the world’s most endangered species and create a more sustainable future for life on our planet. Images like Jo Ann’s are a reminder that we can make a difference. We all play a role in managing our impact on the natural world. ”

MacArthur’s portrait is on display at the Natural History Museum until May 28, 2018.